SARASOTA – American baby boomers have started to sense that they are part of a massive and transformative popular movement that’s still in search of a name — and the 300-plus people now here for the International Conference on Positive Aging are waiting for them to show some initiative and sense of belonging. 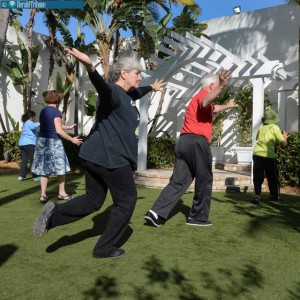 Members of Taoist Tai Chi of Sarasota demonstrate mind-body practices that promote positive aging during the International Conference on Positive Aging at the Hyatt-Regency in Sarasota on Monday.

Members of Taoist Tai Chi of Sarasota demonstrate mind-body practices that promote positive aging during the International Conference on Positive Aging at the Hyatt-Regency in Sarasota on Monday.

Many of the 78 million boomers can expect to enjoy 25 or 30 “bonus” years of life, thanks to the current longevity boom, and aging specialists believe they will want and need to exercise greater control over how those years are spent. But this new approach to late life will have to be improvised from scratch. That means it’s time for boomers to join the conversation.

“There is no model, really, to go back to,” said Craig Vogel, president of the Live Well Collaborative at the University of Cincinnati.

One keynote speaker at the conference, nonprofit entrepreneur Marc Freedman, spoke of a new generational calling to establish “encore careers” that would add deeper dimensions of meaning. Another, epidemiologist Victor Strecher at the University of Michigan, addressed the need to age “on purpose” — using core personal values to inspire self-improvement and lead more healthful lives.

Their remarks bounced around the first full day of the conference Monday, inspiring plenty of echoes: “Conscious elderhood.” “Intentional living.” “Life by design; not by default.”

The conference, in its seventh year, comes to Sarasota from California but got its start at Eckerd College. The Institute for the Ages, a local start-up nonprofit foundation, is hosting the gathering of professionals — who range from therapists to tech innovators — as its first high-profile effort to put Sarasota on the map when it comes to aging research.

The institute’s influence on the gathering was seen in an array of talks about technological innovations that can both boost elders’ quality of life and also turn a profit — such as an “augmented reality” smartphone map that will someday guide patients through hospital campuses.

But many sessions at the conference, which runs through Wednesday, remain true to its roots in growth psychology and spirituality.

Participants seem to agree that what is happening to the boomer cohort is “unprecedented.”

The challenge seems to be in how to make boomers pay attention, and then take an active role in their destinies.

“Look at the search for names,” said Ron Pevny, director of the Center for Conscious Eldering in Durango, Colo. “We’re all trying to find names — ‘intentional aging,’ ‘healthy aging,’ ‘purposeful aging,’ ‘positive aging.’ We need an overarching vision of a culture of conscious elders.”

Pevny acknowledged that reinventing the American image of retirees will call for a certain amount of reflection and commitment — “inner work” in the therapeutic jargon of the conference. A new respect for elders as “the wisdom keepers, the storytellers, the memory of society” will have to be earned and claimed, he said.

“Throughout millennia, cultures have looked to elders as being absolutely critical to the well-being of society,” Pevny explained. “Obviously, we live in a society that does not have a role for elders. But that does not mean that calling is not there. In many of us, it’s lying dormant. We can honor that call by preparing ourselves.”

Preparation is hard to come by, though, for people entering their “third age,” said Poul-Erik Tindbaek, a professor in Aarhus, Denmark. That is the time, roughly from 60 to 80, “when you are independent and self-reliant, and the fourth age is when you become dependent and need some help.”

Tindbaek created two-day workshops to help people think about this stage of life before it happens. The workshops, he said, were funded by the European Union because “the government wants more seniors to stay on the job” rather than draw pensions.

“It is not so difficult to understand why it can be so difficult a transition — maybe the most difficult in a lifespan. You have 20 years for preparation” before the 40 years of working and child-rearing begin, Tindbaek said. “Then you have fulfilled your purpose. How much time do you have to prepare for the last 20 years?”

The answer, he said, is to open public dialogue about what is often considered a private matter — the choice of whether to keep working or retire. Most people change their plans after discussing all the options with peers, he said, and 33 percent of participants in his workshops have chosen to keep working past the age of 60.

Arriving at a new definition for the years from 60 to 80 — something vastly different from the “Golden Years” touted by Sunbelt retirement community developers a generation ago — was the topic for a session led by Elizabeth Mahler, a senior fellow with Northeastern University in Boston.

It is an idea people are just beginning to grasp.

“I tried to offer this topic two years ago and they told me they didn’t think people were ready for it yet,” Mahler said. “We don’t really have a definition yet; we’re pioneers. Retirement was a social construction in the 1940s to get rid of people in the workforce. It’s time to come up with a new social construction.”

Mahler conducted a telephone survey to find out what makes Americans start planning for the phase in life when “people think we’re too old, but we know we’re young.” She found that the process generally begins with a shift in perception.

“People had a sense of a whole different way of operating in the world,” she said. “Somebody they knew died and it hit them really hard, or talking to people about financial planning suddenly got really interesting. Little ideas started to pop out in terms of the way they looked at their world.”

Pamela Baron, senior services program director for the Jewish Family & Children’s Service of Sarasota-Manatee and among the local aging specialists at the conference, said she encountered many themes that preoccupied baby boomers years ago, and they struck a chord with her.

“I’m looking at how many more years I’m going to work,” she said, “and it’s finite. A lot of what I’ve been hearing has been like being on campus in the ’60s, listening to my professors.”